The Cenozoic era is divided into five periods:

During the Cenozoic, mammals proliferated from a few small, simple, generalized forms into a diverse collection of terrestrial, marine, and flying animals, giving this period its other name, the Age of Mammals, despite the fact that birds still outnumbered mammals two to one.

The Cenozoic is just as much the age of savannas, the age of co-dependent flowering plants and insects, and the age of birds. Grass also played a very important role in this era, shaping the evolution of the birds and mammals that fed on it. One group that diversified significantly in the Cenozoic as well were the snakes. Evolving in the Cenozoic, the variety of snakes increased tremendously, resulting in many colubrids, following the evolution of their current primary prey source, the rodents.

In the earlier part of the Cenozoic, the world was dominated by the gastornid birds, terrestrial crocodiles like Pristichampsus, and a handful of primitive large mammal groups like uintatheres, mesonychids, and pantodonts.
But as the forests began to recede and the climate began to cool, other mammals took over.
The Cenozoic is full of mammals both strange and familiar, including chalicotheres, creodonts, whales, primates, entelodonts, saber-toothed cats, mastodons and mammoths, three-toed horses, giant rhinoceros like Indricotherium, and brontotheres.

Machairodus was a genus of large machairodontine saber-toothed cats that lived in Europe, Asia, Africa and North America during the late Miocene.

The skull of Machairodus was noticeably narrow compared with the skulls of modern pantherine big cats, and the orbits were relatively small. The canines were long, thin and flattened from side to side but broad from front to back like the blade of a knife, as in Homotherium. The front and back edges of the canines were serrated when they first grew, but these serrations were worn down in the first few years of the animal's life.

Machairodus was about 2 metres long and probably hunted as an ambush predator.
Fossils have been found in all continents.

Jurassic Park (1994) by Steven Spielberg is surely the most famous dinosaur film. 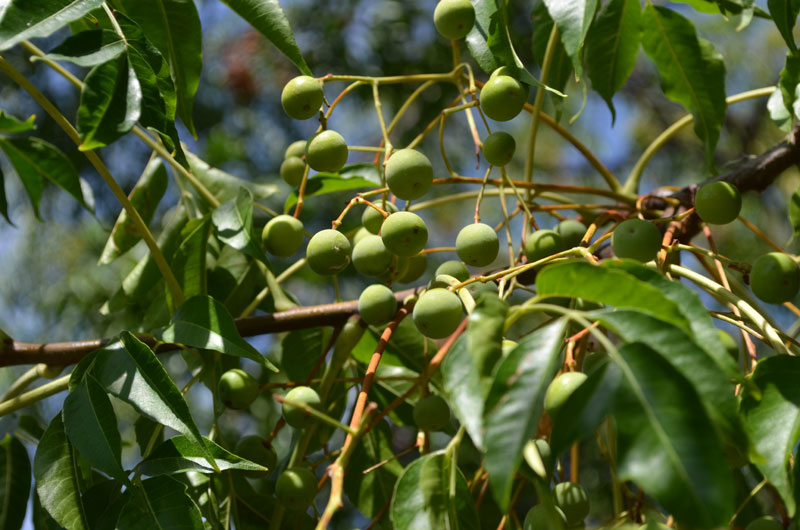 Melia azedarach, is a species of deciduous tree in the mahogany family, Meliaceae, that is native to Indomalaya and Australasia.

The adult tree has a rounded crown, and commonly measures 7-12 metres tall, however in exceptional circumstances M. azedarach can attain a height of 45 metres .The flowers are small and fragrant, with five pale purple or lilac petals, growing in clusters. The fruit is a drupe, marble-sized, light yellow at maturity, hanging on the tree all winter, and gradually becoming wrinkled and almost white.

Platybelodon ("flat-spear tusk") was a genus of large herbivorous mammal related to the elephant (order Proboscidea).

It lived during the Miocene Epoch, about 15-4 million years ago, and ranged over Africa, Europe, Asia and North America. Although it thrived during its time, it did not survive past the Miocene.

Platybelodon was very similar to Amebelodon, another, closely related gomphothere genus. Due to the shape of the two lower teeth, which are worn by many gomphothere genera they are popularly known as "shovel tuskers."

It’s the ancestor of the elephant.

Proconsul nyanzae is a species of fossil primate first discovered by Louis Leakey on Rusinga Island in 1942, which he published in Nature in 1943. From an anatomical point of view, we can say that the cuts had to be like that of a baboon, the nose was prognato and the toro sopraorbitario was absent.

The teeth was characterized by large canines and premolars eteromorfi.
The limbs were predisposed to quadruped locomotion, but according to some researchers could express some tendency towards brachiation.
The diet had to be omnivorous, consisting of vegetable as elements seems to suggest the slight thickness of tooth enamel upper molars and premolars.